This brief summary of my life, from childhood to my current vantage point of three score years and ten, focuses on events and experiences that guided, pushed and led me to support Land and Sea Country management by Australia’s Indigenous peoples, resulting in the publications and other documents that are available through this website.

Laid out in chronological order a life’s journey can appear more ordered, inevitable even, than it lived; the reality, of course is very different.  Like most lives, on my journey there were plenty of stumbles, uncertainties and anxieties.  I am very grateful and indebted to my family, friends, colleagues, mentors and Countrymen who taught, listened, supported, comforted and loved me along the way.  It is because of each and every one them that I could pursue the projects, policies and ideas that are documented here.

Leaving Ireland
I spent the first 10 years of my life in Dublin, Ireland, then emigrated to Australia with my family in 1959.  That process of leaving Ireland, travelling half way around the world on a ship, experiencing diverse countries and cultures en route and settling into a new country set in motion the trajectory of my life – my love of the sea, ships and sailing, my interest in travel and cultures around the world and, later, my work supporting Indigenous land and sea management in Australia. 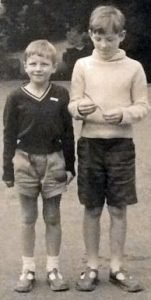 With my brother Chris the day we left Ireland

With my brother Chris the day we left Ireland

While my journey from Ireland to Australia was a wide-eyed adventure for my ten year-old self, it was also accompanied by a sense of grief: the loss of kin and Country. I remember the wrench of leaving my extended family behind, especially beloved cousins, aunts and uncles and the loss of close school friends. I remember the sadness of watching the Irish coast recede over the horizon from the deck of the ferry that took us across the Irish Sea to Wales, and then the train journey to London to board the SS Iberia for the voyage to Australia.  Further information on the SS Iberia is provided here.

The sea journey to Australia opened my eyes to the different cultures and geographies we encountered along the way – stopping at Gibraltar, Aden, Bombay,  Colombo, Singapore, Freemantle, Adelaide, Melbourne and finally Sydney.

Canberra
I spent the next 10 years of my life in Canberra where I attended Yarraluma Primary School, Telopea Park High School and later Australian National University, where I studied zoology.  Canberra in the 1960s was a small country town with the trappings of a national capital.  While the presence of foreign embassies gave a hint that there was an world beyond the Brindabella Mountains that formed the western horizon, day to day life was comfortably suburban and largely mono-cultural.

Wallacia
On completion of my studies, with a group of fellow students I organised a four week research expedition in 1971 to study the animals of Taam Island in the Kai Island group in Eastern Indonesia in a region known to biogeographers as Wallacia – named after the great biologist of the 19th century Alfred Wallace.

Wallace suggested that animals in this region originated from both Asia and Australia, and his research there led him to publish a theory of evolution by natural selection essentially the same, and at the same time, as Charles Darwin’s theory.  While we did collect some new interesting information to build on Wallace’s earlier work, for me the lasting impact of our time on Taam Island was our interaction with the islanders who were so welcoming to us and had such an intimate knowledge of their land and sea environments on which they depended. Our experiences on Taam are described here.

Ghana
Having acquired a taste for the tropics, on my return to Australia I applied for scholarships to undertake post-graduate studies at the University of Ghana in West Africa and the University of Fiji in the Pacific.  I’m still waiting to hear back from Fiji, but my application to Ghana was successful and I moved to the university campus in the capital Accra in 1971. 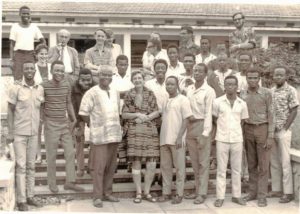 The Zoology Department at the university of Ghana was staffed by a spirited, eclectic group of Ghanaian and expatriate (mostly British) academics with a strong commitment to the conservation of the region’s unique biodiversity and contributing to the sustainable development of the country through research and teaching. I had access to the departmental motorbike and was encouraged to travel extensively throughout Ghana and into neighbouring countries, such as Togo and Upper Volta (now Burkina Faso) – both ex-French colonies. While I focused my studies on the behaviour and ecology of several species of fruit bats (flying foxes),

Far North Queensland: Introduction to Country
Text to be inserted

Searching for a Niche
Text to be inserted